In the midst of the valley of Cerna River, between the Mehedinți Mountains, legend tells of a place where Hercules came to rest and recuperate after his long, arduous labours. The nourishing waters of this place have attracted people for millennia. Roman baths were established here to make use of the enriching hot springs back in 153 AD and in more recent times, it was the prestigious luxury resort of the Austro-Hungarian Empire. The place is adequately named, Băile Herculane.

The 19th century saw Băile Herculane transform into a hot-spot for travellers and royalty alike, with casinos, baths, hotels and spas. It was a culmination of history, beauty and natural wonder. Emperor Franz Josef, even once stated that the Herculane Baths was “the most beautiful resort on the continent”. And I’m sure it once was. However, walking through the town today, one can’t help but feel melancholic and mournful. The impressive Rococo-styled architecture lie in ruins. Ill-kept, abandoned and ignored, the once beautiful resort, has become a dishevelled shadow, a shell of its former glory. 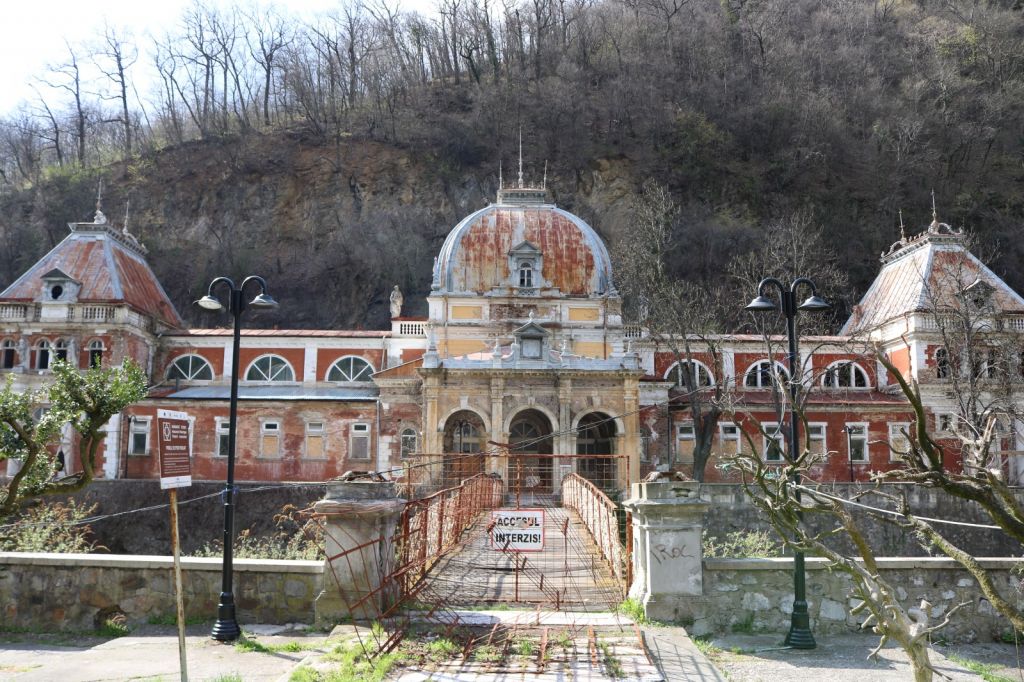 The most impressive of these open-air museums is the Neptune Baths. Resting across the river, the bridge to cross does not seem inviting. Luckily enough, there was an alternate bridge further down, where you could admire the bathhouse up close. 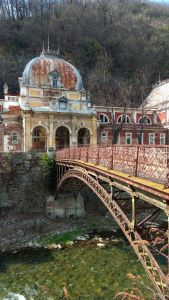 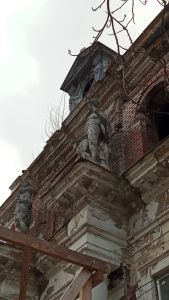 The building stretched along the river, from which you could already see a few pools of natural hot springs down below. The bathhouse, although a crumbling ruin, was nonetheless a spectacle to observe. With statues and gargoyles adorning its walls, coloured bricks and stone with a beautiful arched entrance. It was sealed shut, with fencing and netting in order to protect passersby from falling debris.  Nevertheless, my curiosity was peaked, and I found myself scouring the building for a way inside. “There’s always a way” I said to myself, and a phrase I say all too often when out exploring.

I come to the far end of the Bathhouse, and find a narrow alleyway. I squeeze through, turn the corner and lo and behold! A secret entrance.

For safety’s sake, I do not endorse this type of reckless exploration. There were many hazard signs that warned of potential collapse. So please, do not try this at home, I am a professional fool, and I do this so you don’t have to.

After shuffling around a large empty pool, I came to the first hallway. I was sure to step lightly, and careful to step where there was surely solid ground. The corridor, illuminated by the arched windows, glowed in a fainted pink. With Latin inscribed on each end. 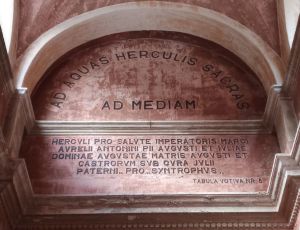 Exercising my school Latin, I was able to translate some of the text, which reads as follows:

To the sacred baths of Hercules

To Hercules, for the health of Emperor Marcus Aurelius, Antoninus Pius Augustus and Julia Domna Augusta, Mother of the Augustus and of the camps, erected under the care of Julius Paternus… Procurator… Syntrophus.

The corridor branched into many small private rooms, each with their own small bath which could hold I’d estimate up to four people comfortably. There was a total of three large corridors, all with their own different colour scheme, which I would assume would be to separate men from women. 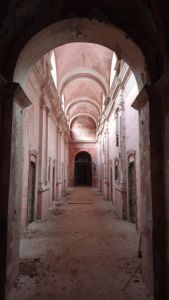 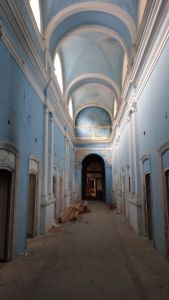 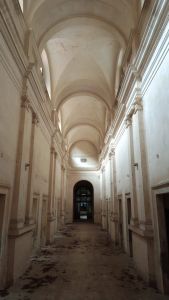 At the centre of it all was the reception hall. By far the most impressive room of the dilapidated bathhouse, with intricately painted walls and a curved arched ceiling, laden with balconies, further embellished by a grand ornamental fountain in the middle. 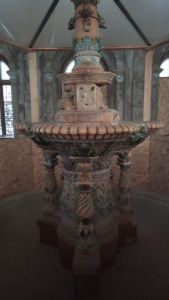 The Neptune Baths were truly a marvel to behold, and I consider myself very lucky to have been able to witness the interior. Be that as it may, the state that this Bathhouse, is disappointing, to say the very least. And not just the Bathhouse, but all the other buildings from this period in Băile Herculane. This was once the most esteemed resort in all of Europe little over a century ago, and now it is in ruins.

The good news, is that a group of young Romanian architects are making moves to restore this once beautiful resort. They have already established enough work to prevent further deterioration, and their dream is to reinstate a fully functioning Bathhouse and spa.

Read further about the battle to save the spa:

See some slightly more professional photos of the Neptune Baths: