The designs and ideas of the Modernist era went on to shape the face of furniture design as we know it, and many of those pieces are now certified works of art. With the rise of Modernism, techniques to create brilliantly simple, comfortable furniture could be licensed and produced everywhere. The modernist focus was on creating clean, light, functional furniture, with smart material use that could be mass-produced affordably across the globe.

When we think of Bauhaus or modernist furniture, it’s easy to characterize it as all steel, glass and neutral colours. However, some Bauhaus designers created furniture that acted as 3D representations of their work with paint and canvas. Josef Albers was one such artist. His two-dimensional artworks Homage[s] to the Square dealt with color and geometry, while these 1926-7 nesting tables quite literally added another dimension to those works. Each was crafted from acrylic-layered glass and solid oak, and used the three key Bauhaus colours: red, yellow, and blue. Designed to work “independently and interdependently” of each other, they’re a living, functional embodiment of experimentation with geometry and form.

Painter, sculptor, designer, Hans Hopfer has designed sofas which are widely regarded as  iconic pieces of the Roche Bobois collections. Since the 1970s, his innovative and uninhibited approach to comfort has had a far-reaching influence on interior design and the way we furnish our living rooms.

In 1971, he created the MAH JONG, a sofa based on total freedom of function and form.The composition options are almost limitless, providing people with endless opportunities to reorganise their living space. One can experiment with the height and even convert its form from simple family sofa into daybed, lounge sofa for entertaining, guestbed..

The MAH JONG is handmade in a specialist artisan workshop in Italy using processes and techniques similar to those of the haute couture fashion industry. Designed rather like a mattress, each component is unique and hand-stitched. Avant-garde when first created and still iconic today, the Mah Jong has been dressed by Missoni Home, Jean Paul Gaultier and Sonia Rykiel Maison and its free form seating has long been the role model for modular creative design.

Ludwig Mies van der Rohe was born Maria Ludwig Michael Mies and he was a German-American architect. He is commonly referred to and was addressed as Mies, his surname. Along with Le Corbusier, Walter Gropius and Frank Lloyd Wright, he is widely regarded as one of the pioneers of modernist architecture.

Mies van der Rohe was a  colossus, dominating the worlds of both architecture and furniture design. The Barcelona Chair is perhaps his most iconic furniture piece. Its design is inspired by the “X” shapes of Egyptian folding chairs and Roman folding stools, and was intended to elevate these humble designs into a throne worthy of royalty (it was intended for the Spanish royal family to rest their weary legs at the 1929 Barcelona Exposition).

Florence Knoll is best known as the design director of the Knoll furniture company. She took over its day-to-day running from her husband, Hans Knoll, after he was killed in a car crash in 1955. Knoll, as a company, acted as a sort of record label for top-tier designers at the time, and Florence persuaded architects like Mies van der Rohe and Eero Saarinen to contribute furniture designs to its books.
As such, Florence Knoll’s major contribution to furniture design was as a kind of creative director for the entire industry. Many of the company’s designs were also her own, all of which were a driving force in shaping the office aesthetic of the 1950s and ‘60s. Her sofa is an iconic piece in its own right, and sums up her attitude to aesthetics: square geometry, a mix of textiles and steel, and a clean form that still looks fresh today.

You’ve seen the Egg chair around: it’s everywhere. Even McDonald’s has the Egg in their swankier outlets. While it may seem a little bit Austin Powers, the idea behind the Egg’s form is that it should give its user some privacy while in public spaces. And it works, thanks it its high, cocooning sides. The Egg was originally purpose-designed by Arne Jacobsen for the Radisson SAS hotel in Copenhagen in 1958. It became one of the best-known chair designs around and is still one of the most instantly recognizable pieces from the period.

The idea behind the Castiglioni Arco floor lamp was to have a lamp with an adjustable arm, so you could change it according to the table or room it was used in, or adapt it for different people’s heights.

“We were thinking about a lamp that shines light onto a table. They already existed, but you had to walk round them. To leave enough space around the table, the base had to be at least two meters away. Which was how the idea for Arco came into being. We wanted to make it with commercially available parts and we found that curved steel angle iron worked perfectly well. Then there was the problem of the counterweight: a heavy weight was needed to support it all. Our first thought was concrete, but then we chose marble because the same weight took up less space, and also because we could obtain a better finish  for a lower cost. In Arco nothing is decorative: even the beveled corners on the base have a function, which is not to hurt us; even the hole isn’t a flight of fantasy, but to make it easier to lift the base.” Achille Castiglioni (interview for Ottagono, 1970).

Poul Henningsen was a Danish author, critic, architect, and designer, who was one of the leading figures of the cultural life of Denmark between the World Wars. In Denmark, he often is referred to, simply, as PH. His novel designs are featured in many museums. International interest in his work was revived during the 1960s.

The PH Artichoke was designed in 1958. It is made of 12 steel arches and 12 rows. Henningsen placed six copper ‘leaves’ on each row and because each row is offset from the previous one, all 72 leaves can be seen. The Henningsen PH Lamps Series was one of the best-sellers throughout the mid-century and still is today.

Marcel Breuer was a Hungarian-born modernist, architect, and furniture designer. Breuer extended the sculptural vocabulary he had developed in the carpentry shop at the Bauhaus into a personal architecture that made him one of the world’s most popular architects at the peak of 20th-century design.

Husband and wife, the couple of American designers  made significant historical contributions to the development of modern architecture and furniture. Among their most well-known designs is the Eames Lounge Chair. They also worked in the fields of industrial and graphic design, fine art and film.

This beloved chair was coined “The Best Design of the 20th Century” by Time magazine. How do you top that?! And it’s easy to see why it earned the distinctive title. The form is amazingly sleek, and the piece is as comfortable as it is pretty. Charles and Bernice Alexandra Ray Eames established their relationship with Herman Miller in 1946 with the design of these molded plywood chairs.

Eero Saarinen was a Finnish American architect and industrial designer noted for his neo-futuristic style. Saarinen is known for designing the Gateway Arch in St. Louis, Missouri.

Also called the Pedestal Table, the Tulip Table was completed in 1956, originally with a cast aluminum base that was said to be inspired by a drop of liquid. A modern kitchen and dining room staple, Eero Saarinen’s table has become a beloved icon of chic Mid-Century Modern style.

Alina Dascalu is the owner of Roche Bobois Romania. Roche Bobois is a world leader in furniture design and distribution…. 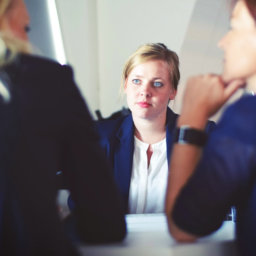 It’s that time of year again—the midsummer debut of IKEA’s 2018 catalog. Every catalog has a theme and the 2018…